In Argentina tango is a way of life, a religion, a sacrosanct tradition. It had previously been said that in Argentina ‘Everything can change except the Tango’, And then there was Astor Piazzolla, who changed the music they used to love 40 or 50 years ago. What he was doing wasn’t dancing tango, and it wasn’t singing tango. It was a contemporary music. In the mid-20th century, Piazzolla created a new genre that would become known as the Nuevo Tango, Piazzolla added influences of jazz and classical music to create his music. He freed the tango of his homeland from its long-established traditional form and imbue it with more modern nuances and rhythmic complexity, and today he is one of the most celebrated composers of the modern tango.

The Histoire du Tango, the first work to be feature on this compilation, is a tribute to the development of the Tango. Originally written for flute and guitar (the earliest tango instrumentation) in 1986. It was Piazzolla’s lifes work to bring the tango from the bordello’s and dance halls of Argentina Into the concert halls of Europe and America. It attempted to convey their history and evolution of the tango in four movements, Bordello 1900, Cafe 1930, Nightclub 1960, and Concert d’Aujourd’hui.

The 2nd movement “Cafe 1930” of this much-loved classic is performed here in the version for violin by current violin prodigy (Chloe Chua, age 11), one of the artists on the recording. Violinist Chloe Chua, the First prize winner in the Junior category of the 2018 Yehudi Menuhin Competition (Geneva, Switzerland), has been hailed as ‘a musician of international standing. An outstanding talent among the violinists of his generation’, such an incredible violinist at her age! Also performing on the recording is acclaimed former guitar prodigy (Kevin Loh). He studied at the Yehudi Menuhin School in London and participated in guitar competitions all over the world.

With his “Histoire du Tango”, Piazzolla retraces the history of Argentine tango throughout the 20th century. Café 1930 strikes a very different note. Tango has evolved to become slower, more melancholic, and no longer just for dancing. People stopped dancing it as they did in 1900. They are now listening to tango orchestras, and violins are featured for the first time. 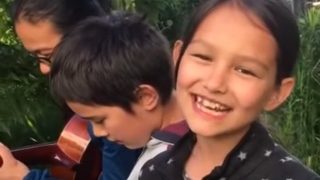